What would Daisy do? Character development 101

This week I have to honor of being a guest on Evelyn Cullet's 'Evey's Writers Blog'. Check it out at http://evelyncullet.com/penny-clover-petersen-daisy-rose-mystery-series/#comments

What would Daisy do?

One of things I like about writing is being someone else for a while. I can be eccentric, or angry, or charming and it all works out for the best. I like to take a situation and imagine how each of my characters would handle it. I have three main characters, sisters Daisy and Rose who own a gift boutique together and their mother Angela who interferes.


Suppose these ladies are on their way home from a funeral. They drove separately and are about ten minutes apart as they pass through a speed trap. What would each lady do?


Angela Forrest after being pulled over would first let her dog, Percy, out of the car to answer a call of nature. She would then tell the police officer that she's so sorry she may have been a little distracted. She is on her way home from a dear friend's funeral and her mind was elsewhere. She would go on to say that she hoped he is wearing sunscreen, especially on his neck, because he certainly doesn't want sun spots later on in life, and he could use a little Biz in the laundry to get the tiny ketchup stain off his shirt. Finally she would scoop up Percy who had chosen the officer's leg to have a good time with, give him her calling card, and invite him for dinner. She would then get back in the car and drive away, the policeman never having had the chance to get a word in.

Daisy Forrest Greene, on the other hand, would probably not be so diplomatic. She isn't the greatest fan of the police, her ex-husband, rat-bastard extraordinaire Bill Greene, being a detective with the Maryland State Police. I'm pretty sure Daisy would roll down her window, give the officer a 'look' and say, "What!" After being asked if she realized that she had been speeding, she would answer that, of course she was and you would be too if you had just had to sit through the longest, most boring wake of your entire life. One hundred and fifty people in a hot room overwhelmed with the smell of lilies talking about a nasty old woman who was ninety-nine years old if she was a day and the only reason these people were there was on the off chance that she left them something in her will. Finally she would hand him her license and registration after a bit of digging in her purse and tell him to get a move on if he was giving her a ticket because she had a vodka and tonic waiting at home with her name on it. Incorrectly, but fortunately for her, he would think that she was Detective Greene's wife, not his ex, and give her a warning. She would sigh, shake her head and speed off.


And then there is Rose Forrest. A bit less volatile, Rose would give the officer an alluring smile as she hands him her license and registration that happen to be right at hand, tosses her hair back as she says, "I'm so sorry. The day was so lovely, I guess I got a little carried away. It's so good to be alive." A tear would trickle down her cheek and she would mention that she was just returning from attending a close relations funeral. She could also absolutely understand if he needed to give her a ticket. She really should be more careful and will in the future. At which point, the poor sap, already worn down by Angela and Daisy, simply gives in to the inevitable and tells her he's very sorry about her loss and please take care.


Of course, none of these is even remotely resembles how I would handle this sort of thing in real life. What would actually happen is I would have purse panic looking for my license, become nearly hysterical as I fumble in the glove box for the registration, answer politely if all too honestly all his questions - yes, of course I know I was doing 60 in a 40 zone and no, I have not been drinking unless you count the 14 cups of tea I had waiting for my mother to say good-bye to all of her friends. At this point I no doubt would burst out crying. And not looking too alluring with a red runny nose, I would get a big fat ticket and be sent on my way.

Seven to Ten Days from Tuesday

Have you ever thought that you were, perhaps, an Invisible Person? Are you, like I seem to be, the Invisible Customer, the Invisible Patient, the Invisible Voice Crying in the Wilderness? I'd like to think I'm not the only person in the world who seems to be constantly overlooked.

An instance of this rather annoying condition -  my husband and I recently contributed to Maryland Public Television and requested a thank-you gift. Tom has been looking forward to listening to endless hours of 1950's pop music. I have not, but that's not really the issue. The issue is that it's been almost two months now and we have no music.

I called this morning to find out where the heck our CDs were. After being put on hold three times as the woman who answered tried to figure out just who I was and what I had requested, I was told that, oh dear, it seems that our little contribution was incorrectly entered into whatever database they use. Silence.

Silly question from me. When can I expect my music? Well, if they have one in the studio - about two weeks from next Tuesday. Is it me or is this rather odd? Perhaps, they only mail things on Tuesday.  At any rate, Invisible Person that I am, I got a rather vague apology and no promise of any particular help. I mentioned that this was not a great way to do business and got a pretty darned soggy, "Sorry."

And my husband just walked in the door and gave me a second Invisible Instance - just today. He'd been to the eye doctor. He has been seeing this doctor for several years now, in fact, ever since he opened the practice. The receptionist asked my husband a long list of questions which he answered (with a degree of irritability, not understanding why he was telling her things she must already know). When she came to the last one - "How did you hear about us?" - he realized that she thought he was a new patient. She hadn't found his file. Really!? Invisibility strikes again.

Anyhow, I find that this dread disease seems to attack me more and more often. I think I'm actually fading because it couldn't be that the current customer service mentality is not so much about service, as it is about getting you off the phone, could it? For any of you who also have this affliction, I wish you well and you'll receive the gift for your generous donation seven to ten days from next Tuesday.

I have a very special blog today. My great-niece, Mia Maria Rafield, has written a short story. Mia was visiting Mimi and Poppy's house where she discovered an actual, old-fashioned typewriter. She was intrigued, deeming it "fascinating". Mia mastered the operation of the machine in no time and began to write. 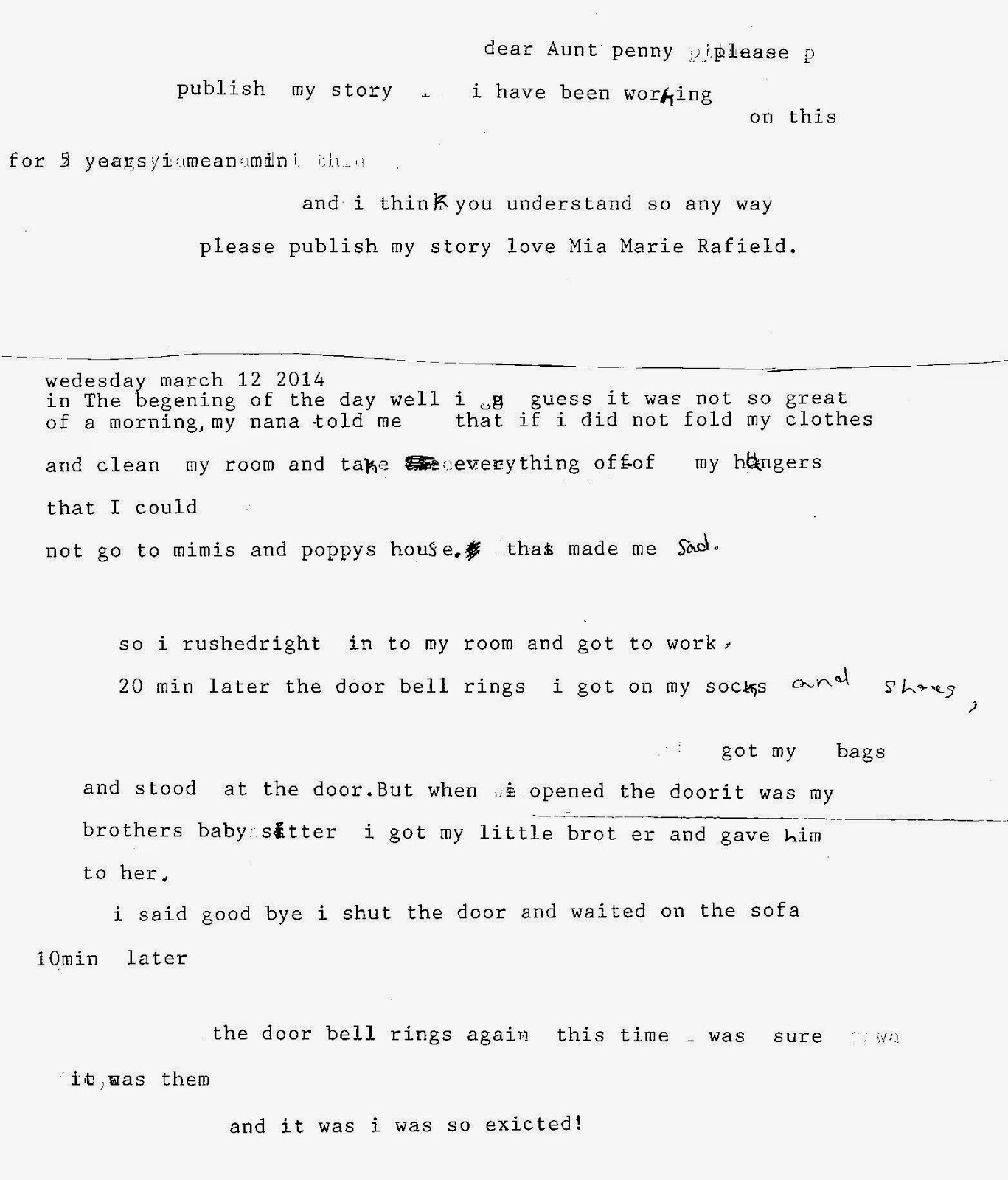 Mia is in the second grade and loves to read, read, read. But she's not only a bookworm. Mia also has her yellow belt in karate, is a Daisy Scout, loves archery and climbing, and they haven't invented an amusement park ride that she won't go on. And I have to add that she's cute as a bug!

I have re-typed the entire story and letter here with a bit of editing (spelling and punctuation only, the text is all Mia's). I hope you enjoy this budding author's work as much as I did.

In the beginning of the day, well I guess it was not so great of a morning. My Nana told me that if I did not fold my clothes and clean my room and take everything off of my hangers that I could not go to Mimi's and Poppy's house. That made me sad.

So I rushed right in to my room and got to work.

20 minutes later the doorbell rings. I got my socks and shoes, got my bags and stood at the door. But when I opened the door it was my brothers' baby sitter. I got my brother and gave him to her, I said good bye. I shut the door and waited on the sofa.

10 minutes later the door bell rings again. This time was sure it was them. And it was. I was so excited!