Pride and Prejudice, the rest of the story 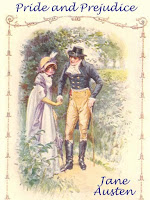 What can I say? I love Jane Austen. I’ve read all of her books and seen many of the film versions of them. I simply love the words. I love reading them and hearing them. I love the characters and the setting and the manners.
My favorite is Pride and Prejudice which I just finished watching for the umpteenth time. The BBC version, of course, with Colin Firth and Jennifer Ehle. Perfection.
As I sighed at the end – Elizabeth and Darcy’s rather chaste kiss as they were driven away from Longbourn – I got to wondering about just what happened to all the Bennet daughters. What were their lives like? Did they all marry well? Did Mrs. Bennet confine herself to her room for the rest of her life enjoying fits of vapors? These are things I would dearly love to know. I wish Miss Austen had written a sequel. As she didn’t, I have filled in the stories for myself.
I am quite sure that Elizabeth and Darcy had a passionate marriage lasting at least sixty years. No doubt they died in each other’s arms, having had simultaneous heart attacks while attempting some rather athletic love making. Not a bad way to go.
Jane and Bingley had a long happy marriage. Not quite so passionate as that of her sister, but with quite as much love. They had six beautiful children. And as Mr. Bennet predicted the family was a happy, and luckily, quite wealthy one, for they were much too good-natured and trusting for their own benefit.
Mary, quite naturally, married an impecunious curate in a rather obscure parish. She spent her life piously boring the congregation to tears and playing the piano badly.
A good marriage was arranged for Kitty to a dull, but suitable young man. They lived an unremarkable, but satisfactory life together. The only fly in the ointment was that Kitty threw a fit at least once a year because her husband steadfastly refused to take her to Brighton.
And then there is Lydia. She, I think, had the most interesting life. Wickham died of syphilis deeply in debt to various merchants and bookmakers ten years into their marriage. Luckily, he had lost interest in Lydia before he contracted the disease. Having estranged herself from her family entirely, even her mother had given up on her, she was left with only one hundred pounds a year and saddled with her three children who had inherited all the worst traits of their parents. One can only imagine what gems they were. While she was hopeful that her father would pass away and she would come into a portion of his estate, Mr. Bennet seemed not to care to accommodate her in this. Thus Lydia, using her most impressive talents, became a fashionable madame catering to the military stationed in Brighton under the name, Mrs. Flanders.
Mr. Bennet did Mrs. Bennet the favor of out-living her so that she should never be thrown out of Longbourn by Mr. Collins. The dear lady actually had real heart palpitations one afternoon, but no one noticed as neither Jane, nor Lizzy was there to take her a cup of tea. Afterward, Mr. Bennet found that life at Longbourn without any females in residence was so peaceful and so free from worry that he managed to make it to one hundred years old, also out-living Mr. Collins.
So, there you have it. Is Jane Austen turning in her grave or having a good laugh? I rather think the latter.